The speed and passion of Kumho Tire is flowing around the arena. Whether it is the chest of China's senior golf queen Feng Shanshan, or the CTCC China Touring Car Championship and FIA F4 China Championship; whether it is the United States Basketball Professional League NBA or the Premier League football in the world's largest football team Tottenham Hotspur and French Lyon. Clubs, different countries, different sports, different fan culture, the same is the active figure of Kumho Tire. 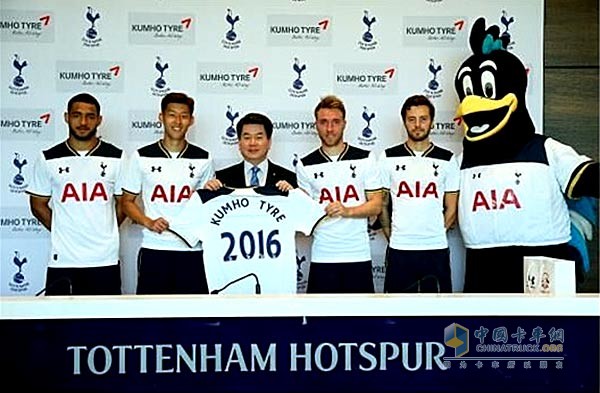 As early as the early 90s of the last century, Kumho Tire began to enter into international competitions that can fully reflect the superior performance and quality of tires. Over the years, Kumho Tire has been working hard to promote the development of motor sports in China. It has become the official designated tire brand for the CTCC China Touring Car Championship and CFGP China Formula One Grand Prix. It has also vigorously promoted the racing exchanges between China and South Korea and brought South Korea's Super Race competition to China. The Formula FIA F4 China Championship, which is highly valued and promoted by the FIA, has also been providing exclusive high-performance racing tyres exclusively for Kumho Tires since 2015.

Sports marketing, Kumho tires, explosion-proof tires, tire Kumho Tire's goals and ambitions are more than that. With its history of nearly 20 years of racing tire development and sponsorship around the world, Kumho Tires has entered the F3 highest-level event â€œMasters of Formula 3â€ since 2002 and has been for 15 consecutive years. Selected as the official tire. Not only that, Kumho Tires were designated as official tyres from 2012 to 2015 by the Auto Grand Prix World Series in the F1 sub-league.

In addition to the motorsport itself, Kumho Tires has also stretched across the tentacles into golf, basketball, football, baseball, and other popular sports. Although golf is not considered a popular sport in China, the Chinese golf queen Feng Shanshan, who signed a three-year sponsorship agreement with Kumho Tires in 2014, is known to the public. On the Kumho Tire Women's Golf Open hosted by Kumho Tires, Feng Shanshan For the second consecutive year, he won the runner-up at Weihai Kumho Hana Golf Club. The tournament has been successfully held for four times since July 2013 and its influence has been gradually expanded.

Not long ago, Kumho Tire also repeatedly throw two heavy bombs. Firstly, on July 19th local time in England, they announced that they had reached the official sponsorship cooperation with the Premier League Third Team Tottenham Hotspur in the 2016/2017 season. The image of Kumho Tires will start next season in the English Premier League and the subsequent Champions League. In the game, the team played at White Hart Lane Stadium. A day later, on July 20th in French local time, Kumho Tires officially announced that they had reached a strategic cooperation with the French Ligue 1 club, the Royal Lions of the Legacy. They even received unanimously unanimous approval from the club's board members as the team mascot Lyon. The image of the lion adds new equipment - a backpack with Kumho Tire brand elements.

Sports Marketing Helps Kumho Tire Achievement Speed â€‹â€‹and Passion Dream Sports Marketing, Kumho Tires, Explosion-Proof Tires, Tyres It is foreseeable that sponsoring various sports events in the future will remain the most important means for Kumho Tireâ€™s corporate marketing. Kumho Tire will also continue to increase investment in Chinaâ€™s auto races. On the one hand, Chinaâ€™s car ownership is already the highest in the world, and the auto sports industry is booming. As the earliest company to support the development of Chinese auto racing events, Kumho Tireâ€™s future will also More emphasis on sports marketing in the Chinese market. On the other hand, it is also intended to allow Kumho Tire's products to be tested in Chinese competitions in order to better provide Chinese consumers with products and services.

For Kumho Tires, the spirit of never giving up promoted by the sports arena is an integral part of the company's development and growth, and it has always been the quality of learning. Through cooperation with excellent clubs and outstanding athletes in different projects, Kumho Tires also gained higher popularity in the United States, Europe, and the world, and their influence has gradually increased. The sports arena is a young and energetic enterprise that presents the best occasions for corporate image to consumers all over the world. Through accumulating consumers' sense of brand recognition, it achieves effective communication with target customers. The unique and differentiated high-end marketing strategy of Kumho Tire was achieved.

China leading manufacturers and suppliers of Steel Nut,Wing Nut, and we are specialize in Din Astm Nut,Steel Juk Nut, etc.