Nowadays, in northern China, there is a phenomenon of road surface pulping. The roadbed is the basis of highways, and the road surface slurry phenomenon has a great negative impact on the strength and stability of the roadbed. We can timely prevent and solve road surface flooding issues from the aspects of highway design, construction and maintenance.

The basic way to prevent tumbling is to prevent the moisture from entering the upper part of the roadbed before or during the freezing process. During the defrosting period, the water is promptly discharged from the poly ice layer or temporarily accumulated in the water-permeable pavement structure layer. We can improve the soil base and pavement structure by laying a barrier. The barrier layer can be divided into a water-permeable barrier layer and a water-impermeable barrier layer according to the material. The permeable barrier layer is made of gravel, gravel, coarse sand or slag strips. The staff first uses a peat, chippings, turf or slag to lay a 1 cm to 2 cm barrier. This prevents fouling. After that, a permeable barrier layer with a thickness of 10 cm to 20 cm is laid. Impervious barriers are enclosed and unclosed. The former is applicable to road sections with difficulty in surface drainage or high groundwater level, while the latter is applicable to general road sections. 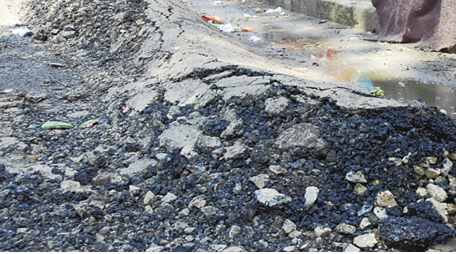 In addition to laying the insulation layer, we can also change the soil. This method is aimed at tumbling sections caused by poor soil quality or local tumbling of old roads. The first step is to excavate the slime and soil where the roadbed is thickened. It is best to excavate all the soft soil, and then replace the broken (gravel) stone or sandy soil with a thickness of 40cm to 60cm. After layering and compaction, rebuild the road surface.

Both the laying of the insulation layer and the replacement of soil can solve the phenomenon of road surface slumping. However, some problems are caused by the unconformity of the construction. If strict regulations are required during construction, unnecessary maintenance can be avoided. In the construction process, compaction of the embankment can only be carried out when the water content of the material is within the limits of the compaction test. Otherwise, relevant measures must be taken to enable the material to be filled near the optimum moisture content to avoid the subsequent occurrence of frosting of the road surface. problem.

We are able to supply you with a whole range of  Lucas Alternator at a reasonable price with original certificate assured. kindly browse our web zowoparts

Lucas Alternator Parts are in-stock and available for all lucas models. get a great deal on a quality lucas alternator.

An alternator is an electrical generator that converts mechanical energy to electrical energy in the form of alternating current. for reasons of cost and simplicity, most alternators use a rotating magnetic field with a stationary armature. occasionally, a linear alternator or a rotating armature with a stationary magnetic field is used. in principle, any ac electrical generator can be called an alternator, but usually the term refers to small rotating machines driven by automotive and other internal combustion engines. an alternator that uses a permanent magnet for its magnetic field is called a magneto. alternators in power stations driven by steam turbines are called turbo-alternators. large 50 or 60 hz three phase alternators in power plants generate most of the world's electric power, which is distributed by electric power grids.